On July 30 at 2:54 AM, police responded to a robbery at a business call at 1025 N Highland Ave (Food Mart / Chevron).  Upon arrival, the officer discovered the front door of the business broken and laying on the ground.  The cashier explained that he noticed a silver Chevrolet sedan sitting in front of the store for approximately 30 minutes without anyone exiting the vehicle to come into the store.  Becoming suspicious, the cashier locked the front door

As he looked out the door, he noticed two black males walking east on Virginia Ave past the store.  One of the males was pushing a bicycle.  Shortly afterwards, he noticed both males walk back past the store traveling west.  He looked closer and observed the male pushing the bicycle had a cap, a navy blue / tan jacket and blue jeans. The second male had a white t-shirt on.  The two males walked across N Highland Ave and out of view.  Shortly afterwards, the silver sedan left from the front of the store and drove over to the Wells Fargo Bank.  The driver stopped and parked outside the bank.

Shortly thereafter, the black male who had been pushing the bicycle came back to the Chevron without the bike.  The second male, who the cashier estimated to be in his early 40s, came to the window, knocked and asked if they were still selling beer.  The cashier answered yes, and opened the door to let him in.  The suspect entered the store, went to the standing cooler and retrieved one can of beer and brought it up to the cash register.  As the cashier walked from the front door to go back to the register, the suspect pulled out a black pistol, pointed it at the cashier and demanded that he give up the cash.

The cashier was at the door of the bullet-proof room, so he just opened the door and closed it in the suspect’s face.  The cashier then pushed the panic button that set off the alarm in the store.  The suspect then ran back to the front of the bullet-proof room where the cash registered and the opening for cash/card exchange occurs.  The suspect tried to put the gun under the opening, but quickly pulled it back and ran out of the store.  As he went to go out of the door, he pushed against the right side of the double-width doors.  As he did not realize the door on the left was unlocked, he pushed the right door with enough force to pull both doors off the hinges.  The suspect then ran west on Virginia Ave and may have possibly turned on Todd Rd NE, though the cashier could not be sure.  The cashier provided police with video footage from the store’s security cameras which confirmed everything he had explained.

On August 2, 2020, police responded to a person injured call on the 1000-block of Monroe Dr.  Upon arrival, police met the reporting party (Daughter) who stated that her mother (Mother) injured her during a dispute.  Daughter stated that she and Mother went out to a party the previous night to celebrate Mother’s birthday.  Daughter stated they consumed several alcoholic beverages throughout the night and had a great time. Daughter also stated her mother cannot maintain herself in a civil manner when she is under the influence, therefore, leading to a verbal dispute at their residence, which escalated into a physical altercation. Daughter stated her mother grabbed a knife and came towards her, also holding it up to her neck. Daughter then ran for the door screaming "HELP" until a passerby assisted her with dialing 911. When police arrived, they observed an abrasion to Daughter’s head and scrapes on her knuckles and knees.  Police spoke with Mother and immediately noticed evidence of blunt force trauma to her lip.  Mother stated her daughter cannot maintain her alcohol and they got into a verbal altercation.  Mother stated there was a tussle, but it did not involve a knife.  She also denied that her daughter caused the injury to her lip.  Daughter told police that she was responsible for the injury to Mother’s lip because she was trying to escape the threat.  An ambulance arrived on scene and checked both parties out and both Daughter and Mother declined further evaluation.  Because police could not determine the primary aggressor in the incident, both Daughter and Mother were taken into custody.  Mother was charged with Aggravated Assault 16-5-21, and Daughter was also taken into custody and charged with simple battery DV 16-5-23(f).  Both parties were taken to Grady detention for further medical evaluation.

On August 21, 2020 at approximately 9:36 AM, police responded to a call concerning theft of a bicycle.  The victim stated that he went to bed last night around 10:00 PM.  When he got up this morning around 9:00 AM, he noticed that the door to his carport storage room was ajar.  He then discovered that his black Kona Commuter bike with white lettering, valued approximately $1000, was stolen.  There were no suspects, witnesses, or video recording devices on scene.  The victim stated that the storage room door was not locked, and there was no damage done to his property during the theft.

If you see someone or something suspicious, please report it to the police.  When driving or out walking keep an eye out in the neighborhood, what you see and report just might prevent a crime.

Reminder:  All members call 911 first if you see a crime in progress or a suspicious person or activity, and then call the Virginia Highland Security Patrol Phone.

Thank you to our business sponsors. Our patrol is targeted at residential members with many of the benefits of the patrol. However, businesses benefit as well. Since our officers are patrolling, they can assist on-duty officers when calls are made by businesses to 911 and are often first on the scene when they are on duty. Of course, some businesses need dedicated security and elect to have their own staff, especially bars that stay open later and need someone watching the door, parking lots, etc.

A handful of businesses in the commercial nodes have elected to sponsor the patrol with generous contributions. I'd like to take a moment to recognize those top level Platinum and Gold sponsors.

·  Highland Real Estate (Scott Stern owns most of the properties in the Amsterdam/N. Highland commercial node and a building at the corner of Virginia and Highland)

If you are a business or commercial property owner in Virginia-Highland and would like to sponsor our patrol, please send an email to [email protected]. 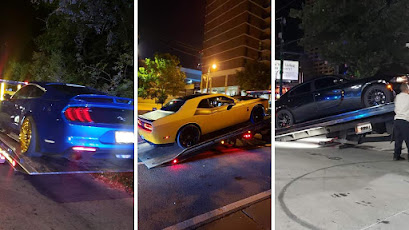 The victim reported that he was driving on Virginia Ave near Park Dr when he came upon a large group of people on skateboards blocking the roadway.  The victim said he drove around the group which apparently upset one of the males in the group, who then hit the victim’s car window with a skateboard.  The victim reported that he stopped his car, though it had not suffered any damage.  When he got out of his vehicle, he was hit in the back of the head with a skateboard by an unknown male.

The victim advised that he had video footage of the incident that he found on an Instagram account, though it was not clear how this was located.  The victim told officers that the video had since been deleted, but he had saved it on his cellphone and he played it for officers.

The video starts with a large crowd of people that did not appear to be in a roadway. The video then skips as if something was cut or missing from it and shows the victim standing outside his vehicle by the driver side door, facing a group of white males.  The victim appeared to be engaged in a verbal dispute with the males, but there is no audio.  The victim reported that he was initially kicked in his genital area by one of the males, but there were several people blocking the view so it was impossible to see this on the video.  The video then shows the victim punching in the air towards one of the males, apparently in response to the kick.  One of the males with a skateboard then lunges at the victim but does not make physical contact.  The victim is then seen charging at another male, after which he is struck in the back of the head by a skateboard wielded by a white male in a light-colored shirt.  The victim appears to grab a skateboard from the ground and walk back toward his vehicle, at which point the video ends.

The video did not show the start of the incident before the victim exited his vehicle to confront the crowd of males with skateboards, and the victim could not explain the missing parts of the video so it was difficult to understand what transpired in the missing footage.

The responding officer contacted Zone 6 investigators who advised the victim that he should visit the Zone 6 precinct to make a statement and complete an information report.  The officer also asked dispatch to check 911 call logs for the time the incident occurred.  Dispatch found a pedestrian struck by vehicle call and two calls for gun shots in the area.  Police asked the victim if he owned a gun, which the victim confirmed and acknowledged he had a carry permit and had the gun with him the day of the incident.  The victim then admitted that he "brandished" the gun but did not fire it.  The victim was asked why he omitted this information, which he blamed on being “foggy” from the staples in his head.  The victim then became increasingly uncooperative and refused to answer any further questions.  After further attempt at conversation, the victim became verbally combative and told me to leave.

On July 23, at approximately 6:13 AM, police responded to a commercial burglary call from an employee of Neighbor’s bar.  The employee had arrived at the business around 6:00 AM and discovered that the left glass door was broken out of the north facing building at the corner of St Charles Ave NE and N Highland Ave NE.  Two security cameras captured footage of two figures approaching the bar between 4:00 am and 4:12 am. The camera showed a possible light skinned black male enter the business and make his way around the bar. The suspect was dressed in a black or dark button front short sleeved shirt and short pants, and had a full short Afro-styled haircut and a “five o’clock shadow” facial hair.

The suspected entered the business carrying a paper shopping bag that he set down after pulling a bottle of alcohol from the top shelf.  The suspect passed multiple bottles of wine and spirits to his partner, suspect #2 - a skinny white or even lighter skinned male also with a shopping bag. The second suspect appeared to have on a white tee shirt with a long-sleeved shirt tied about his waist and a light-colored ball cap.

The reporting employee stated that approximately six bottles were stolen that retailed for $300 dollars in loss.  The video of the incident was shared with Zone 6 investigators.  No suspects at this time.

If you see someone or something suspicious, please report it to the police.  When driving or out walking keep an eye out in the neighborhood, what you see and report just might prevent a crime.

Reminder:  All members call 911 first if you see a crime in progress or a suspicious person or activity, and then call the Virginia Highland Security Patrol Phone.  The phone number is 770-310-0871.