What the NPU Means for Virginia-Highland 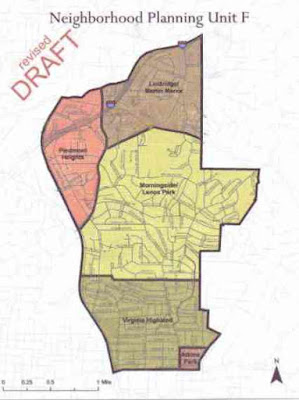 As we all hurry through our busy lives looking after children, doing our work, and volunteering in the community in one way or another, many of us may have overlooked a critical resource known as the Neighborhood Planning Unit (NPU).

In the words of Debbie Skopczynski, NPU F Chair, “The NPU is our opportunity to speak to city representatives, and for them to communicate with us. The NPU meetings provide residents and business owners with a chance to meet and speak to city officials they would not otherwise encounter.”

The NPU system was originally instituted by Mayor Maynard Jackson in 1974. It was his way to ensure that all residents would have an opportunity to comment on what was happening in their communities. To ensure that politicians (who might prefer that the public be unheard and compliant) could never strip away the right to be heard, Mayor Jackson included the NPU system within the City Charter. The charter can only be changed by the Georgia Legislature.

There are twenty-five NPUs in the City of Atlanta, and Virginia-Highland is included in NPU F along with Morningside/Lenox Park, Lindridge/Martin Manor, Piedmont Heights, and Atkins Park (which is also a part of Virginia-Highland).

Though originally intended to address zoning, land use, and other planning issues, over the years the charter has expanded to include review of applications for special events such as festivals, and review of alcohol license applications. And though a City of Atlanta Planner is assigned to each NPU and tasked with recording votes and reporting back to city agencies, the NPU itself is staffed completely by volunteers who receive no compensation.

As Debbie Skopczynski indicates, “it is a civic responsibility to participate in the process. Attending NPU meetings and voting on issues is an easy way to do that.” Beyond the idea that we all need to participate, engagement with the NPU can help to keep our community safe and thriving. At NPU meetings you will find APD command staff, Fulton County Community Prosecutors, Alex Wan, your city council representative, Atlanta Fire Rescue, MARTA Police, Code Enforcement, Public Works and others. This is your single best opportunity to share your concerns, to find out what is being done, and to build a relationship with these representatives that will make it so much easier to ask for help in the future.

In addition, recognizing that requirements differ from one area of the city to the next, NPUs are allowed to define the by-laws whereby they operate. The only requirement is that all residents and business owners within the NPU be given an opportunity to vote on the by-laws once a year. NPU F is one of the few that is run democratically. That is, anyone who is a resident and over 18 can vote on any issue before the group. Many other NPUs and neighborhood associations only allow board members to vote.

As it is run today, our NPU is very transparent with agendas, meeting minutes and other important documents all available online at http://www.npufatlanta.org/. At that website you will also find contact information for questions and for key officers.

Since the Virginia-Highland Civic Association is a representative body (meaning that we elect a board and empower them to vote for us), the NPU is the single best opportunity to make your wishes known on specific issues.

Perhaps one of the most dedicated volunteers from Virginia-Highland is our NPU F Chair Debbie Skopczynski. Debbie moved to Virginia-Highland in April 1991 and quickly became involved. In addition to a long career with Coca-Cola, and in telecommunications with BellSouth, AT&T, and Cingular, she served on the VHCA board in the early 90s and as NPU Chair in 1996-1997 (during the Olympics). After that she served on the Board of Zoning Adjustment until 2001. And here she is back for another turn as NPU F Chair in the current term.

Debbie continues a long family tradition telling us that, “Citizen involvement is one of those values that my parents shared for as long as I can remember. One of my earliest memories is going to vote with my mother back before there were voting machines. My sister and brother have all been involved or been leaders in their professions or communities.”

Debbie let me know that the part she likes best about her involvement with the NPU and the different community organizations and city departments is being able to connect with others to understand why things are the way they are. She also wants to make a contribution to the community.  Perhaps some of you would like to do that too!

If you would like to volunteer or become more involved in NPU F, election for new officers and committee chairs will occur in November. Officers consist of Chair, Vice-Chair, and Secretary. Committees are being realign in proposed by-law changes, but subject areas addressed include Zoning and economic development, Traffic and Transportation, Public Safety, Parks and Recreation, Environment, Tree Protection and Education, Licenses and Permits (including alcohol licenses), and Education. The nominating committee will present nominees at the October meeting and nominations will also be accepted from the floor at both the October and November meetings.